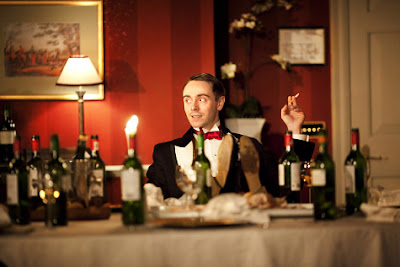 If it hadn't been for the fact that there were a lot of attractive young men on stage for nearly three hours, most of whom have promising careers in acting ahead, I would have been terribly bored by this play after the first half hour. Actually, I couldn't wait for it to be over and sympathized with Rachel Johnson, journalist and London Mayor Boris Johnson's sister, who left at the interval, pleading fatigue and suggesting the playwright Laura Wade send her a draft next time so that she get some of the details right (apparently one does not refer to Oxbridge as "college"). Boris Johnson, along with new PM Cameron and Chancellor George Osborne, were all members of the Bullingdon Club at Oxford upon which this play is based. The point of the club is two-fold: to get blind-drunk, then destroy the dining room where you have eaten, afterwards offering the proprietor full compensation for the damage in cash, which he will take gratefully. Its second purpose is to maintain the old boy network in all its power and glory in perpetuity. Though the play is packed with sharply written repartee, it lacks any depth or subtlety, and frankly I got much more out of reading the Wikipedia entry on the Bullingdon Club then on watching "Posh." The title alone reveals the one-note that will be hit relentlessly for two hours and forty-five minutes. As a title, it's vague and all-encompassing, lacks any metaphor or detail. If this was supposed to be a social critique of entitled power, it failed, and almost drove one left-wing theatre critic for the Independent to vote Tory. (Aha! Perhaps the secret motiviation of this play was to drive the populous into the arms of the Tories--and lo and behold it worked! So I take it all back, the play is a roaring success!) The sport of rich people bashing is fun, but if rich people envy isn't part of the equipment, it becomes, well, rather like watching a game of cricket. That this play, and the like, are at a theatre called The Royal Court, now that's dramatic irony of some caliber.
Posted by Jenny at 00:08