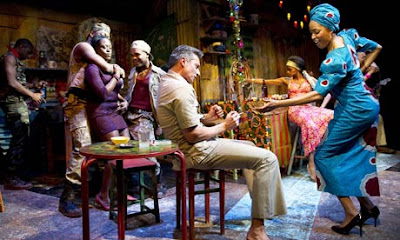 As someone who is called "too feminist" by various members of my extended family, I am actually adverse to seeing agenda driven plays, so despite the great reviews avoided seeing "Ruined," the play by Lynn Nottage set in a Congolese brothel while war rages just outside its doors. But when a friend offered me a ticket I went. By the interval I thought I might have made a mistake. The set-up was traditional and there was a strong sense of the usual placating voyeurism that often accompanies art made in the name of the oppressed--the whores were enticingly whorish, the soldiers convincingly threatening. The second half, however, proved to me that Nottage knew just what she was doing and I left the theatre having been in some way transformed. The acting throughout was suberb and the set one of the best and most thoughtful I have seen in a while.
Posted by Jenny at 07:19