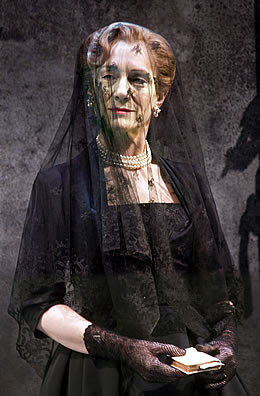 A revelation! Okay, Middleton is not Shakespeare but he's really pretty good. A fantastic play about a woman's lot from a clever male's point of view. After all, women are so endlessly fascinating and so fun to dominate and be dominated by. Many juicy plots and subplots, very erotic and overtly sexual, some great speeches and many quotable lines. Harriet Walter stole the show as Livia but the rest of the cast mostly held their own. I didn't see the necessity of the 1940s updating, nor the very mediocre nightclub jazz singer who nearly ruined the play for me. It did ruin the experience for my theatre pal who can be even more critical and intolerant than I am--bless her. She had just returned from Paris where she saw Irina Brook's La Tempete! at the Bouffes du Nord, and could suffer no mediocrity after that. She left at the interval but I stayed on and was glad of it.
Posted by Jenny at 03:54