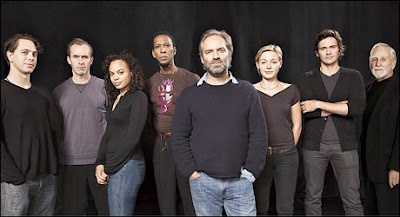 I was told by many trusted theatregoing friends and family members not to see this latest effort from Sam Mendez's The Bridge Project but I went anyway and it really wasn't that bad. Bland, blah, lacking imagination, yes, but viable. There was decidely no magic to this production which is rather a shame in a play essentially about the vicissitudes of magic. Christian Camargo played Ariel more as a vampire than a sprite. Juliet Rylance's Miranda would have been outstanding if this were an amateur production. Prospero was appropriately brooding but couldn't seem to muster much more. The innovations here were unhappy. The slide show depicting scenes from Miranda's childhood, though admirable in its ambition, did not work at all and nor did the dire marriage dance. Ariel's metallic wing contraption was intriguing though incongruous, as if he had borrowed the thing from a sadomasochistic Icarus who happened to be trudging by. I wish Ariel had stayed in his mermaid evening dress for the entire play. His dark suit with no shirt made me think he was on his way to a rave straight after the play. And the mishmash of accents could have been interesting but was just annoying. Still, I was glad I saw it because though the production was devoid of pizzazz, bereft of animation, the actors did admirable justice to Shakespeare's words in this most excellent play--perhaps my favorite. Doubt I'll go to another Bridge Project production though. I bet this is their last year in any case.
Posted by Jenny at 00:24