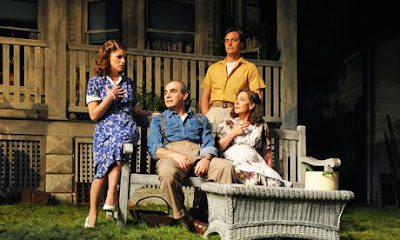 I had promised myself that I wasn't going to see another West End production but then my theatre buddy Paola said someone (who?!) had told her Howard Davies' revivial of his revival (red flags flying) ten years ago at the National of Arthur Miller's "All My Sons" was worth the journey and the price tag, and really was as good as all the critics' raves. I knew in my heart it wasn't going to be true but I relented because I always relent, but also because I'll go see anything with Paola just to be with her she's that great. Besides, I cajoled myself, the West End production of "The Crucible" a few years ago was mind-bogglingly good so I thought maybe the Brits get Miller better than we do. Well, you know where I'm going. It was terrible, yes, terrible, well not that bad, but disappointing for sure. The level of acting was only slightly above regional summer fare, all declarative self-consciousness. I hate watching actors act when exposing the mechanics is not intended. And these guys--Zoe Wannamaker (not a fan--she screamed all the way through "Electra" and totally overdid Serafina in "The Rose Tattoo" at the National) and David Suchet--are veterans! Stephen Campbell Moore's performance as the brother who survived the war and wants to marry his dead brother's girlfriend was, however, fine and layered. Of course, the play itself is just not a great play. It's a good play, an early play, a test run for Death of a Salesman. It's the work of a young genius who is ambitiously trying to imitate and compete with his fathers--Ibsen and Chekov (including the requisite gun shot), George Bernard Shaw (grand dicourses on the evils of moral compromise), and Tennessee Williams (but here only a weak attempt to grapple with the oddities of human sexuality). The set was fabulous, but had more of a southern than midwestern feel--as did some of the accents. Supposedly, this play has been making grown men in the audience soak their handkerchiefs with tears. Paola's comment, "Give me Toy Story III for emotional content over this any day."
Posted by Jenny at 00:26