A Hit and a Flop: this weekend at the theatre in London 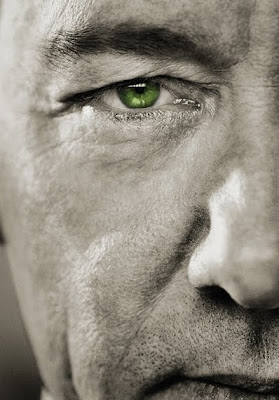 On Friday night I went to see Kevin Spacey in Richard III directed by Sam Mendes and was thoroughly entertained by this timeless thriller about a power hungry, deformed royal who murders his way to the throne. Shakespeare was a funny man and here his humor teamed with horror is deeply pleasurable and wonderfully uncomfortable. The necromancing Bard manages to manipulate his audience into rooting for a serial killer.
The Old Vic has had it's ups and downs while in Spacey's hands but this is decidely an up. Actually, in this case the play would have been better titled "King Kevin" as everything about the production works to highlight Kevin Spacey's acting talents which are considerable given the right material. His rendition of evil is wickedly funny and deadly charming, coming dangerously and tantalizing close to ham but never giving into the temptation. At moments, Spacey's Richard was channeling Keyser Soze from "The Usual Suspects."
The supporting cast was very strong. Especially the women. Gemma Jones as Margaret is very powerful. And that usually preposterous seduction scene early in the play between Richard and (Annabel Scholey's excellent) Lady Anne was so erotic my disbelief was, in this context, suspended for the first time ever. In the final scenes, Jeremy Bobb's Richmond was weak making Spacey's performance have to uphold the entire battle of Bosworth sequence which was more than even he could quite pull off.
The production was modernized--40s costumes, tv screens, one hilarious remote video scene, and projected titles such as NOW, ELIZABETH, CLARENCE, THE PEOPLE, helping us in this multi-stimulus age to stay focused and keep our attention on track.

I hear the Propeller production of Richard III at the Hampstead Theatre is even better than this one. 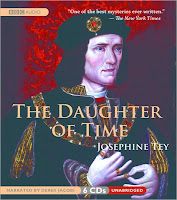 Of course, Richard III is entirely inaccurate historically. Richard was actually a really nice guy with no physical deformities at all. And he never killed anyone, not even the young princes. Only long after Richard III was dead did historical accounts (including the one Shakespeare relied upon) start depicting him as a murderous monster on scant evidence to serve the purposes of later monarchs. For more on this subject read Josephine Tey's brilliant novel "The Daughter of Time" or better yet do as I did and have it read to you by Derek Jacobi.

It took about 30 seconds of Lucy Bailey's production of The Beggar's Opera at the Open Air Theatre in Regent's Park to know it was a disaster. I gave it five more minutes to be sure but my god was that bad. Where to begin. None of the actors could sing. I understand that this is an "anti-opera" but the terrible voices did not seem in any way purposefully bad, just plain bad. The sound system to boot was terrible and on the night we saw it unintentional, very loud speaker farts soon became the funniest thing about the play. The set and costumes were worse than uninspired--flat, predictable, yawn-worthy. Any amateur regional production would have attempted something more imaginative. The worst part of the whole thing, however, was the excruciating portrayal of the Bawdy. As the whores humped posts and bared their breasts in banal displays of the Lewd, I doubt there was an erotic tingle in even one member of the audience. Any Hogarth print is far more animated, scandalous, and naugtily enticing than anything that happened on the stage that evening. How did this play go so terribly wrong? I think the simple answer is that Bailey made the very mistaken decision to mount a straightforward production without any ironic referencing to our own time. Still I would wager that any one of the 62 original performances of John Gay's ballad opera in 1728 at Lincoln Inn Field's theatre was far more entertaining than this one. Several people stood up and left during the first half. Our party of five waited until the interval but reluctantly so. The attendant at the door apologized sheepishly to us as we left.

The Open Air Theatre is not ususally so off the mark and I recently saw there a very solid production of Lord of the Flies. The set was magnificent, the acting (mostly teenage boys) superb, a show that very much succeeded in complementing the book and film. 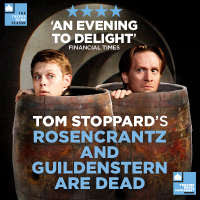 Further London theatre I have seen over the past few months (and failed to write about--busy me) are: an excellent revival of Tom Stoppard's Rosencrantz and Guildenstern are Dead directed by Trevor Nunn with great performances by Samuel Burnett as Rosencrantz and Jamie Parker as Guildenstern--or is that the other way around? The play made me yearn for the days when pseudo-philosophizing was fashionable--and no one does it better than Stoppard--still my favorite living playwright despite some recent faltering. The influence of Beckett and Ionesco is here but really Shakespeare himself is the mentor. Reminded me a lot of Hamlet's conversation with Yorick's skull. My fifteen year old loved it, perhaps even a little more than he did "Deathtrap" last year.

Thea Sharrock's As You Like It at the Globe is entirely delightful and well worth enduring the horrible seats. The Globe productions just seem to get better and better and are close to rivaling the RSC. Naomi Frederick's Rosalind and Laura Rogers Celia are a pair made in heaven and in many ways made sense to me for the first time. Their energy, repartee, palpable mutual attraction, and perfect comic timeing almost stole the show but there is so much to praise here. I have to say I really did feel the woman director's touch.

Deborah Warner's School for Scandal at the Barbican was most excellent, the pomo electronic effects put to exciting use. These between scene projected titles seem to be the thing these days, and so far they are working well to assist our addled brains.

One Flea Spare written by Naomi Wallace about four people quarantined together in a house in plague-ridden London in 1665 is a great premise and mostly successful. A little didactic though and made me wish I taken the kids (my poor kids). I loved the intimacy of the space, if not so much the pub smells.

Cause Celebre at the Old Vic was a great vehicle for Anne-Marie Duff. She's a wonderful actress though hasn't yet mustered the stage presence and confidence to create that frisson in her audience as will, say, a Kristin Scott Thomas.

I should have walked out of The Children's Hour starring Keira Knightly and Elisabeth Moss. It was torture. Terrible acting all around.

Trollope in Barsetshire with Edward Fox at Riverside Studios a snooze. I love Trollope and couldn't bear this stuffy interpretation. 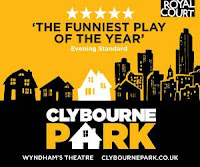 One of the best and funniest plays of this year so far was certainly Clynebourne Park by Bruce Norris who justly won the Pulitzer Prize for this play. Norris hits very close to the bone here and I found myself identifying with characters I didn't like. Many in the audience when I saw it were mystified by the message--just plain couldn't get why a black middle class family might not want a white middle class family to move into their neighborhood. It all comes down to a matter of taste--so very true. Aesthetics is all. I look forward to seeing Norris' new play "A Parallelogram," whenever it comes to London. And last but not least, I saw Derek Jacobi playing King Lear for a second time at BAM in Brooklyn. It was probably even better than at the Donmar, the cast at the very top of their game. My three sisters and I took my father for his eightieth birthday. We all had a blast, especially as we vied for Cordelia status in his eyes.