End and Beginning of Year Round-Up

Over the holiday season it all just got too much for me. I had been drinking too much so I started to write down exactly how much I was drinking on the calender: a vodka on Monday, two glasses of wine on Tuesday, a mohito and a glass of port on Wednesday (that hurt) etc. etc. I decided to do the same with my theatre addiction in hopes that I would realize the extremity of my indulgence and cut way back. It started to spin out of control in early December with The Master Builder at the Almeida. "If I've said it once, I'll say it again," I said to myself as I sat through this less than cohesive star vehicle (Gemma Arterton/Stephen Dillane) that was trying to be "edgy" but was just bad, "no more plays with movie stars!" But what did I go see the next week in New York? The Merchant of Venice with Al Pacino.

He did all right but the production was a mess, made-for-Broadway Shakespeare, (though I'm told it was much better when The Public Theatre did it in Central Park). The actors used all manner of strange accents and did that declarative thing to compensate for the fact that they have no idea what they're saying (alas, so common to American actors doing Shakespeare). Lily Rabe was gorgeous but played Portia as a Southern Belle. Why oh why did I do it to myself? The Russians sitting next to me whispering during the entire performance were a welcome distraction from the confusion on stage. Next up, much to my relief, was a very solid RSC As You Like It at the Roundhouse.

I took three ten-year-old boys and they absolutely loved it. The English just know how to do Shakespeare and especially the RSC. Plenty of laughs and slapstick, audience participation, and when they do the music it's not an afterthought or bad or just trying to fit it in somehow, it's an important and integral part of the show. And Rosalind is just one of the great characters of all time. A temporary respite because very soon I had fallen off the wagon at the Old Vic (how many times have I promised myself never to go back there?) sitting through a terribly unfunny production of Georges Feydeau's A Flea In Her Ear.

This time I took my fourteen-year-old son and he just shook his head in despair. Any street credit I had gained by taking him to see Deathtrap was hopelessly lost. To be fair, the night we saw it Tom Hollander was sick and the entire cast just seemed to have lost their timing but I don't think it was salvagable, with or without Hollander. The question is: if the devil were to tempt me with the chance to see the 1966 Albert Finney production would I go?
I am a sucker for the National Theatre. Ten pounds a ticket how can you go wrong? You can go wrong. Very, very wrong. As in Danny Boyle's Frankenstein wrong.

Johnny Lee Miller and Benedict Cumberbatch alternate roles each night to emphasize the interchangablity of man and monster. Just the first of a number of facile tricks that riddle this travesty. The monster grunts and frets naked on stage (and whichever that was, he isn't Ian McKellen--if you saw his Lear you'll know precisely what I'm talking about) for what seemed like the first half hour of the play signifying what exactly? Maybe it's a lad thing I just don't get. Massive pulleys lift and lower irrelevant scenery and a train engine is rolled on stage for a few seconds a propos of nothing. At that point, I was seriously hoping the cast would break out in song and dance. By the end of the play, the audience was so lost they ended up laughing raucously at a horrible rape scene. The only consolation is that it surely cost less than Spider-Man and Danny Boyle's career isn't at risk the way Julie Taymor's is. I saw two other productions at the National: Men Should Weep by Ena Lamont Stewart

(I try my hardest to see anything by a woman) which was fabulous for the clothes, set, and thick Scottish accents but overlong; and the ancient and accomplished theatre director Peter Hall's Twelfth Night 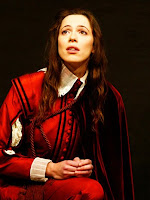 starring his daughter Rebecca Hall was drab (especially the shiny red costumes) and flat, unfunny and unmusical (this is the play, remember, which begins "If music be the food of love, play on"). What was I saying about the Brits and Shakespeare again? I sat in the National's wonderfully intimate Cottesloe theatre thinking, okay that's it, I'm done with Shakespeare, done with the theatre. I've seen too much and I'm drowning. From now on it's cold turkey for me.
Of course, the following week I went to the Donmar to see Derek Jacobi as King Lear. The experience was like being reborn. I left the theatre with all critical faculties suspended, utterly transported, the whole world new to me again. Ripe for readdiction. 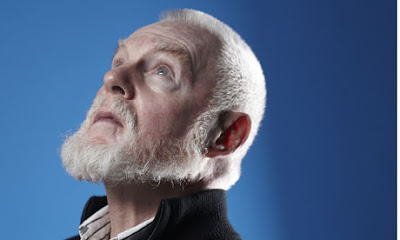