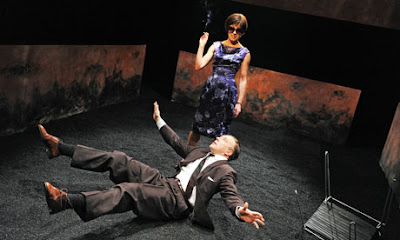 What joy and rapture to discover a new small theatre willing to take risks and bring London audiences challenging theatre. Riverside, Tricycle, Hampstead look out. The Print Room not only brings stiff competition, it could challenge you to up your game. I will admit that I was rather skeptical when I heard they would be putting on a rarely performed play by Pier Paolo Pasolini in a new translation by Jamie McKendrick. I am a huge Pasolini fan but he's not to everyone's taste, in the way that Beckett or Jean Genet or Inge or Antonioni or even Pinter aren't. Pasolini is not an entertainer, he makes his audiences work for their culture. Furthermore, he is one of those artists, again like Beckett, who is very easy to get wrong. And when it's wrong, it's excruciating. It can fall heavily into nonsense and pretention. So it was with a fair amount of trepidation that I went along to Notting Hill's new theatre fashioned out of an old warehouse. The theatre design actually feels more like a Roman triclinium, the audience intimately crowded around a central square, the stage. It lacks the comfort of a triclinium--the seat cushions were far from luxurious--but you are sitting so close to the action as to feel part of it. This can be a good thing or a bad thing. Luckily, the actors in Fabrication were of such a high caliber that being right up close to them added to the brilliance and intensity of their performances. I don't like to summarize plots and Pasolini certainly resists summary; let's just say a wealthy Milanese industrialist has a mid-life crisis and becomes obsessed with his blond-haired son. In very dramatic ways Pasolini explores the nature of masculinity and the Oedipus complex from the father's point of view. Few artists have been truly brave enough to dig so deeply into the male psyche and expose the wrenching vulnerabilities within. Shakespeare's King Lear comes to mind and Pasolini's play made me wonder: What if King Lear had had a son? Sophocles began it all, of course, with his play Oedipus Rex and appears in Pasolini's play as an apparition, much in the way of Hamlet's father, warning ominously about the pitfalls of the artistic life and the fundamental inadequacy of literature. Fabrication is a mightily ambitious, disturbing, surprising, edifying, and very funny play. Jasper Britton is magnificent as the Father, no small feat, and Geraldine Alexander is the perfect combination of brittleness, fear, and indifference as the bourgeoise Mother. Handsome Max Bennett does well with his role as the Son, at once defiant, curious, and terrified by his father's relentless assaults upon him. This production is what theatre is all about and I send a hearty congratulations to The Print Room's Artistic Directors Anda Winters and Lucy Bailey and thank them for their bravery, innovation, and vision. I look forward to seeing Alan Ayckbourn's "Snake in the Grass," playing at The Print Room in the new year.
Posted by Jenny at 01:46