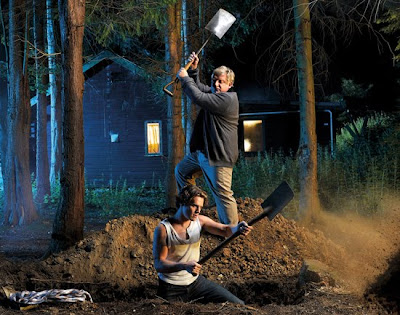 My fourteen-year-old son has attended a fair amount of theatre in his day. With me, he has seen two Hamlets (David Tenant, Jude Law), two Macbeths (Patrick Stewart, Cheek by Jowl), Antony and Cleopatra (Patrick Stewart), two Twelfth Nights (Derek Jacoby, RSC), Much Ado About Nothing (National with Simon Russell Beale and Zoe Wannamaker), A Midummer Night's Dream (Judi Dench), Cymbeline (Regent's Park), two Tempests (Patrick Stewart, RSC), and, believe it or not, I could go on. So when at the interval of Ira Levin's Deathtrap (at the Noel Coward Theatre) he turned to me with a beaming face and said, "I never knew plays could be this good," I had something of a bittersweet comeuppance.
I chose this play because the West End Whingers were postively operatic in their praise on Twitter and because of a gut feeling I've had lately that I better ease up on the Shakespeare or I would alienate my son from the theatre forever more, if I hadn't already. The premise of the play--a playwright past his prime contemplates killing a younger playwright and stealing his play in hopes of a last chance at fame and fortune--is evidently so primal that even a teenager can relate. Or perhaps it's the theme of going to any extreme to kill your wife that my son was relating to. In any case, the first act is very nearly perfect with sharp dialogue and unforseeable plot twists. But what makes this production soar is the casting. Simon Russell Beale's timing and delivery is so impeccable, he can elicit a burst of spontaneous laughter with a raised eyebrow. The very adorable Jonathan Groff's (Glee) combination of sleaze and ingenue is delectable, and Claire Skinner (Outnumbered) outdoes herself as the playwright's wife, at once suspicious and unsuspecting, fawning and fed up. Estelle Parson's as the pyschic neighbor displays sheer comic genius. When Ira Levin dreamed her character up he must have known he had a hit. The set--a refurbished Connecticut barn full of ancient and vintage weaponry--is stunning, Skinner demurely carries off her costume of shiny polyester blouse and spandex trousers with a big belt, and every visual detail is right on as opposed to retro.
If there was anything inappropriately dated about the play, we found it in the audience. We went with a friend of my son's and his mother who ran into an elderly couple she knew during the interval. The woman surveyed the four of us and said, "Now that's very cheeky of you, leaving your husbands at home and coming out to the theatre with your sons. My daughter does the same thing, goes to the theatre without him, but of course she's divorced."
Divorce may be in my future, but I will live in sincere regret for the rest of my life if I have managed to, through imposing my obsessive zeal for The Bard, forever inure my son to the theatre's infinite joys. I am, therefore, eternally grateful to the West End Whingers for their enthusiastic whinging but even more so to Mathew Warchus and his magnificently entertaining production of Deathtrap for giving us such a spectacular evening out. On the way home my son said to me, "motivation, if there's a flaw in the play, Sydney Bruhl's motivation is questionable--does he do it for love or money?" I think he's hooked for life.
Posted by Jenny at 02:42