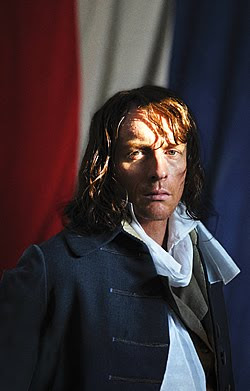 When even the sexy, charming, bad boy Toby Stephens can't keep you awake, you're in trouble. I wasn't going to go see this because how could you improve on Gerard Depardieu in the movie? (Apparently, you can't.) But when one of my charming theatre buddies (Selina) asked me along, I went in hopes of a French Revolution refresher, and having vaguely heard the claim that Georg Buchner's play was the "greatest political tragedy ever written." I was to learn that indeed the play was a tragedy but of another sort: tragically boring. I have since read the West End Whingers review (http://bit.ly/cFwKNd) and wish I had thought, as they did, to bring along my knitting. As I woke up now and again to bad costumes, tedious speeches, and absolutely terrible acting by all the women (albeit their parts were also terribly written), I kept wondering: "Won't the interval ever come?" Alas, it would not since there was none. It is Selina's theory that when a theatre production knows it's dodgy, the interval is quickly done away so as to keep everyone from escaping at the earliest opportunity (which had been my plan exactly). Early in the play, Elliot Levey's Robespierre was creepy enough to keep me from dozing but given the text he couldn't sustain it, and poor Toby's utterly unconvincing philandering, not to mention his political discourse, sent me straight to sleep. Despite the fact that he is adorable, as far as I was concerned, my eyes mostly closed and everything, he might as well have looked like the real Danton-- 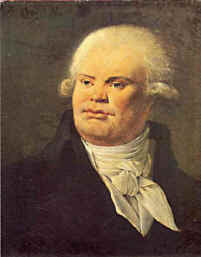 who was so ugly, his obsessive philandering would make more sense. Toby Stephens is really too handsome to play Danton. Even Depardieu is in the hideous kinky category of men.
The best part of the play was most definitely the end and not entirely because the play was almost over. There was a fantastic guillotine on the stage and we got to watch the Dantonists have their heads chopped off, which seemed fitting punishment for all that tortuous nodding off I was forced into for almost two hours nonstop. I'm not sure how they did it, but heads really do plop off into a basket and Selina and I were, for the first time that evening, utterly riveted.

If, for whatever reason, you have a hankering for some French Revolution fare, I would recommend this instead: