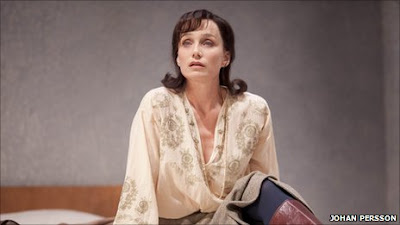 Harold Pinter's 1978 play Betrayal is utterly timeless even if the production at the Comedy Theatre (a less than pleasant venue) makes the most of the era with a fetching Kristin Scott Thomas bedecked in fashionable seventies peasant-wear by Yves Saint Laurent. The story about a woman's seven year affair with her husband's best friend (husband: Ben Miles; Lover: Douglas Henshall) is told backwards and the play's intriguing structure is as much of a character in the play as any of the actors on stage. The experience is riveting even after multiple viewings (I've seen both a previous production of the play and the excellent 1983 movie with Jeremy Irons, Ben Kingsley, and Patricia Hodge). Many claim it's Pinter's best play and from what I've seen of his opus I agree. The Pinter Pause is here used to genius effect and the Pinter Pretention is advantageously contained. Kristin Scott Thomas is my idea of a diva--her intelligence and particular beauty always working together to make any character she inhabits larger than life. I have seen her on the London stage over the past few years both in The Seagull and in Pirandello's As You Desire Me and she was magnificent to watch in both. Alas, somewhat less so in this production of Betrayal, directed by Ian Rickson. I saw it very early in the run, and it already felt, well, tired, and so did she. Even her voice seemed to crack a lot. I felt as if the three actors believed that their performance was the sideshow to something really big happening somewhere else--whereas the key to this play is the utter self-absorbtion of its three protagonists, their triangle central to the very functioning of the universe. 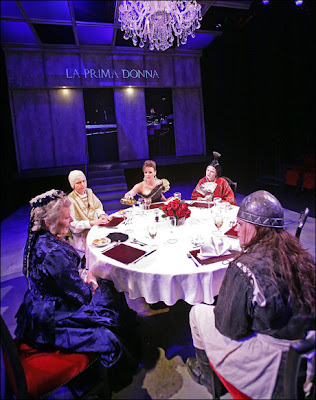 I'd given up on Trafalgar Studios as a venue. For one, it always smells horribly of bathroom and toilet cleaners. And if the production is just mediocre--which they tend to be here--that's a bad combination. But Caryl Churchill is in my top 3 living playwrights list and I'd never seen Top Girls so I got myself a ticket. Sure enough, upon entering the theatre I was immediately greeted by the wafting odor of sickly sweet disinfectants. But I didn't lose heart as the set looked promising and a slide show of Great Women images kept me distracted as I waited for the play to begin. The first Act is Churchill at her very best. Gathered in a restaurant are a bunch of imaginary dead women from history or literature--a cross-dressed Pope, a Japanese concubine, a 19th century Scottish traveler, a Viking housewife, a Medieval peasant who marries up (suggesting to this audience shades of Kate Middleton), and their interaction is both hilarious and relevatory. Acts II and III are more in the realism vein and tell the story of the rise of feminsim and its effects in the 1980s Britian under Thatcher by following the trajectory of Marlene, the new "modern woman" as she struggles with career, family, motherhood. The play's overriding message is: change for women is a Grand Illusion, and the fact that this play was written in 1982 and is as relevant today as ever confirms that message. Despite my adoration of Churchill, this play, as with some others of hers, suffers from a tad too much Agenda. That said, it's a great play, just not up to the more subtle Genius of say Blue Heart, Cloud Nine, or A Number. 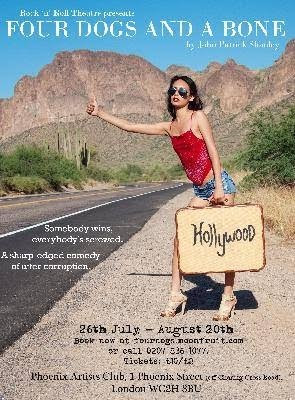 For something really off the beaten path and performed in a truly raunchy little dive (I can't even name the smells, there were so many) head to the Phoenix Artists' Club just off Tottenham Court Road to see Rock 'n' Roll Theatre's production of John Patrick Shanley's 1992 play Four Dogs and A Bone. For a tenner, this actually might be your best bet of the three as this tiny troupe has thrown their heart and soul into the revival of Shanley's blistering satire of Hollywood greed. The venue is so small the audience is practically on stage with the actors making for a rather intense experience. For some, including the friend I went with, this was just one of the aspects of the performance she found excruciating. I, instead, rather liked the InYourFaceness of it all, including the actors' over-the-top performances. But mostly, I thought Shanley's script a hell of a lot of fun, replete with crackling one-liners, and in the hands and mouths of Amy Tez's company, it fully lives up to its reputation as a "butt-sniffing romp through Hollywood's flea-bitten underbelly." (until August 20, for tickets: fourdogs.moonfruit.com)