The Comedy of Errors at the National a Triumph--and the one error I didn't make in what I chose to see on stage this autumn in London...

(i.e. The Last of the Duchess, The Faith Machine, South Pacific)

Thank god I finally saw something grand, splashy, fun, exalted, roll-on-the-floor funny and intelligent at the theater this autumn. If you take your kids to see one panto may it be this one (age 10+). The farting sequence alone is worth the ticket. But OMG the sets! As a truly great set designer (Bunny Christie) will do, not only do the sets reflect the ambitiously wild imagination of the entire production, they create it. As my colleague over at Sans Taste writes: "Vast but nimble, the set effortlessly evokes everything from disused warehouses to yuppy flats, and red light districts to Harley Street grandeur." In one particularly wonderful over-the-top keystones cop moment, an ambulence drives on stage and becomes an integral part of the action.
Shakespeare freak that I am, I had never before seen a production of The Comedy of Errors and I can see why there aren't many: an almost impossible story to pull off from a gazillion points of view. The Bard's hubris from the title onwards is (as usual) breathtaking. Suspension of disbelief never a worry for the playwright, he goes all out on this story of double sets of twins, shipwrecks, separations, mistaken identity galore. Director Dominic Cooke and his incredible cast rise with extraordiary slapstick wit and aplomb to the task, setting the story in a 20th century-ish London-ish Ephesus, by way of the Carribean and Nigeria with a Mariachi quartet as the Greek Chorus. Lenny Henry as Antipholus of Syracuse hits his stride here (his Othello disappointed), both Dromios (Lucian Msamati and Daniel Poyser) are adorable, the entire and considerable cast just so good.
If the show could be stolen (which it sublimely cannot be), Claudie Blakely as Adriana, wife to Antipholus of Syracuse, and Michelle Terry who plays her sister Luciana, would stride off in their form fitting frocks and five-inch stiletto heels with ne'er a wobble, their crimsoned lips slicing up the air with Essex-accented banter, taking with them all the gold chains in Christendom. Do as I say and: Get thee to the National.

The Last of the Duchess 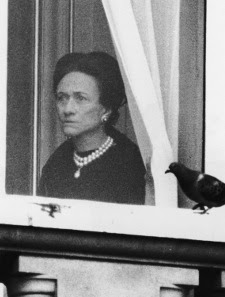 We're having a Wallis moment. "That American woman" has turned up in a number of places recently, most famously in Madonna's movie, but Gillian Anderson excellently portrayed her in Channel 4's weirdly ungripping adaptation of Any Human Heart, and she was done a nice turn by Eve Best in The King's Speech. And she is the subject of a fascinating new biography, That Woman, by Anne Sebba. So of course she should also make an appearance in Hampstead. Everybody loved this play by Nicholas Wright, directed by Richard Eyre, but I most emphatically did not. I went because I love Anna Chancellor (she was the best thing about The Hour). She plays Caroline Blackwood, the aristocrat journalist with all the illustrious husbands (Lucien Freud, Israel Citkowitz, Robert Lowell) who goes to Paris to try to get an interview with the ailing Wallis who is holed up (or imprisoned? Do I care?) in a luxurious apartment, her protector/jailer Suzanne Blum, lawyer to the stars. Blackwood is really only interested in herself, but has to make good on her trip so turns to a profile of the lawyer instead. As far as I was concerned, no one on stage interested me much either as character or actor--including Chancellor who overdid Blackwood as lush. I saw the play in previews and besides the fact that none of the actors seemed to know their lines, I was mostly bored with the non-story. All this obsession with the titled and entitled--Lady Mosely and Lord Snowdon and Lady Caroline--just didn't do it for me. I was, however, thoroughly intrigued by Wallis (Helen Bradbury) herself during her sublime five-minute appearance early in the play. She did steal this show--and I kept hoping, in vain, that she would reappear. I suppose we can't be reminded enough of the fact that the British aristocracy in the 1930s was awfully soft on Hitler. This may be the last we hear from the Duchess for a while, but I have no doubt that she'll be back. 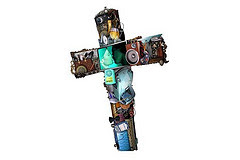 I love The Royal Court Theatre. Such good value no matter what you see. New plays, always interesting, even if they don't really work. At least the ensemble really are trying in myriad ways to explore the craft. The Faith Machine was one of those that didn't quite work. It was too long, preachy, and overacted, but so earnest in a good way about theatre as artform. Rachel Cooke's review in the Observer says it all: (http://www.guardian.co.uk/stage/2011/sep/04/faith-machine-god-soho-review) 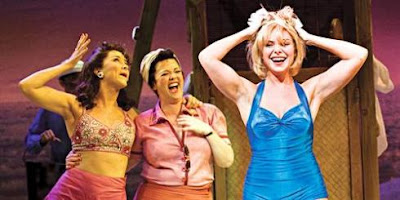 I'm beginning to really get the idea that venue is almost as important as the play itself (duh). So when my sister told me I had to go see South Pacific when it came to London because she had just seen it in New York and it was "out of this world wonderful" I bought tickets right away. When I heard this classic musical was going to be at The Barbican I thought, odd, that's not the kind of thing they do well, really. The Barbican is good for "edgier" fare--though the racial theme in South Pacific might qualify. Anyway, it was a disappointment. Despite the wonderful numbers, the great sets, and lively choreography, it was just flat. It's almost impossible to get "I'm gonna wash that man right out of my hair" wrong and yet it fizzled. The whole cast seemed already exhausted right from the opening number. Apparently, it was a difficult crossing.
Posted by Jenny at 09:32